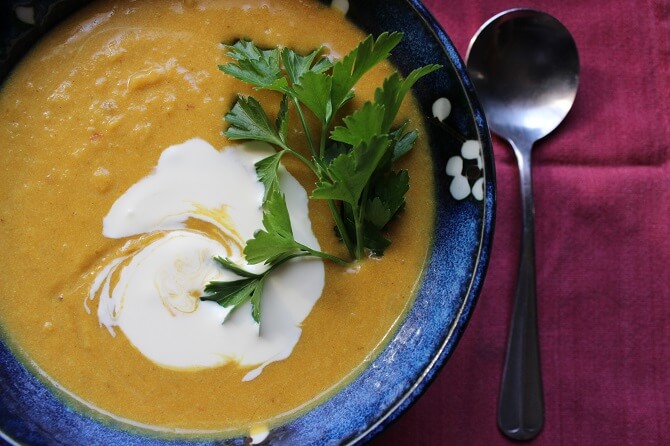 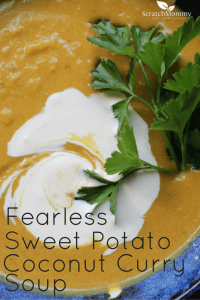 I’m a broth and soup making fiend. Can’t get enough of ‘em. Love love LOVE ‘em! But it hasn’t always been that way.

Growing up in the 80s and 90s, I don’t think I even knew what a real bone broth was. I don’t recall my mother ever making one. But I do remember the bright green plastic container of chicken bouillon cubes that was always near the stove top.

And soup? Well that was something that came from Campbell’s or Progresso. Later, when I became more aware of food quality, I gravitated to the organic boxed soups from companies like Pacific and Imagine.

But none of it ever made much of an impression upon me. Soup was just a quick and convenient meal from a can or a box. And I think that’s how the majority of Americans view soup today.

How I Learned About REAL Broth and Soup

It wasn’t until I traveled to Asia in my late 20s and 30s that I first learned about REAL broth and soup.

Steaming cauldrons of broth and soup are an everyday part of street fare, street markets, and tiny little hole-in-the-wall cafes with makeshift kitchens in full view. A seemingly infinite variety of noodle soups, curries and congees (a rice porridge with broth) are served at all meals of the day, including breakfast.

Every day I was in Thailand I had some sort of noodle soup with different types of freshly made curry pastes, meats, seafood and quintessential Thai ingredients like coconut milk, lemongrass, ginger, lime, chilies, Thai basil and fish sauce.

When I was in Burma I became addicted to mohinga, the national dish of the country, a traditional fish noodle soup with such exquisite flavors that it’s just impossible to describe. Travels to India and Nepal furthered my love of Asian soups.

But it wasn’t until I became a certified Nutritional Therapy Practitioner (NTP) and tuned up to the traditional food movement that I clearly understood why those steaming cauldrons of broth and soup were so prevalent in Asia; and why bones and other animal parts like heads, necks, tails and even feet (key components of a good bone broth), were always on display in all the Asian markets.

I ditched the boxes and cans once and for all and learned to make properly prepared bone broth, the way all traditional cultures used to make them. Properly prepared means a long, slow simmer process which slowly extracts the nutrients from the bones and animal parts and infuses the broths with flavor. Store-bought broths are never properly prepared.

I learned in my training as an NTP that properly prepared broths are rich in gut-healing nutrients such as minerals, amino acids and gelatin. I now specialize in digestive health issues and use real broth and soup with almost all of my clients. And I teach almost everyone how to make them at home.

But I also know that most people today have lost touch with how to make them in the traditional manner. After all, there’s a reason store-bought broths are so popular.

Furthermore, I know most people don’t have tons of time to spend in their kitchen. Self included. I’ve learned to make these things in a convenient and time-efficient way.

How to Make Fearless Broths and Soups

In recent years, making these broths and soups has become an absolute passion of mine. So much so that I decided to write a book! 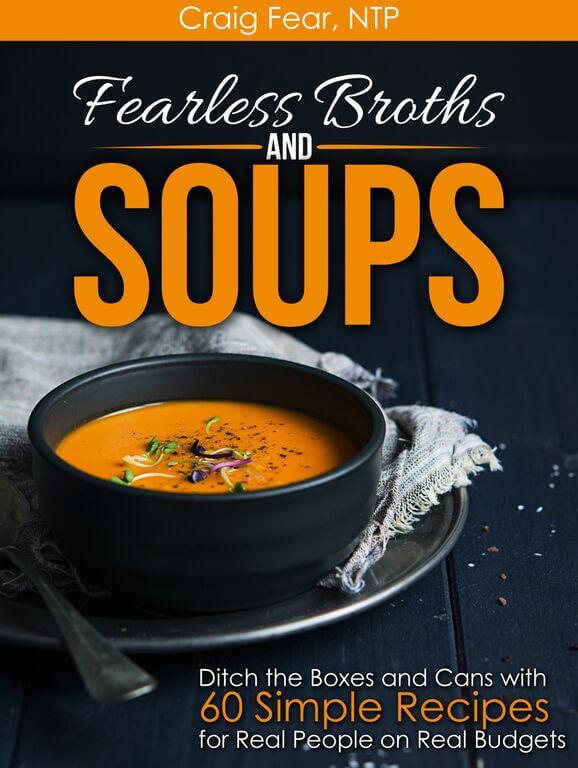 Gimmicky take on my last name aside, “fearless broths and soups” is really what I mean by REAL homemade broth and soup.

I will show you how easy it can be to make them at home, the way our grandmothers and great grandmothers used to make them. But it’s geared to all you stressed out moms and dads, workaholics and non-cooks trying to figure out how to eat well with limited funds and time. For that reason, all of the recipes stress simplicity.

But most importantly, I’ll show you how you can take bone broth and turn it into some of the most heart-stopping, fist-pumping, jaw-dropping, OMG THAT IS SO GOOD!-declaring, drop-dead-to-die-for-delicious meals you’ve ever had in your life.

That is my mission. It is a bold one for sure, but just know that I grew up in the suburbs of Long Island and for the first 20 years of my life my greatest kitchen skill was toasting a bagel.

To prove it to you, I’m going to share one of my favorite recipes from the book.

Just a quick note about my recipes. I always leave room for experimentation in the ingredients. Amounts are adjustable to what you like and I always include some possible variations at the end. As an example this recipe does have a slight Asian influence, so if that’s not your thing, just leave out the curry. It will still be fantastic.

I’m so proud and excited about this book. I loved writing it, I loved creating the recipes and I’m certain it will make a valuable addition to your kitchen. And I’m excited to say that it’s now available on Amazon!

Here’s a little more of what’s inside: 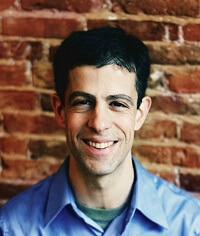 Craig Fear is a certified Nutritional Therapy Practitioner (NTP). He lives in Northampton, Massachusetts where he works with clients with digestive health issues. He started his blog, Fearless Eating in 2011 and wrote his first book, The 30-Day Heartburn Solution, in 2013. To complement his new book, Fearless Broths and Soups, Craig created an online video e-course for bone broth-making newbies called How to Make Bone Broth 101.

Craig’s other interests include hiking, playing his guitar, travel, and rooting for his beloved New York Giants. He also loves coffee and claims to be only mildly addicted to it.