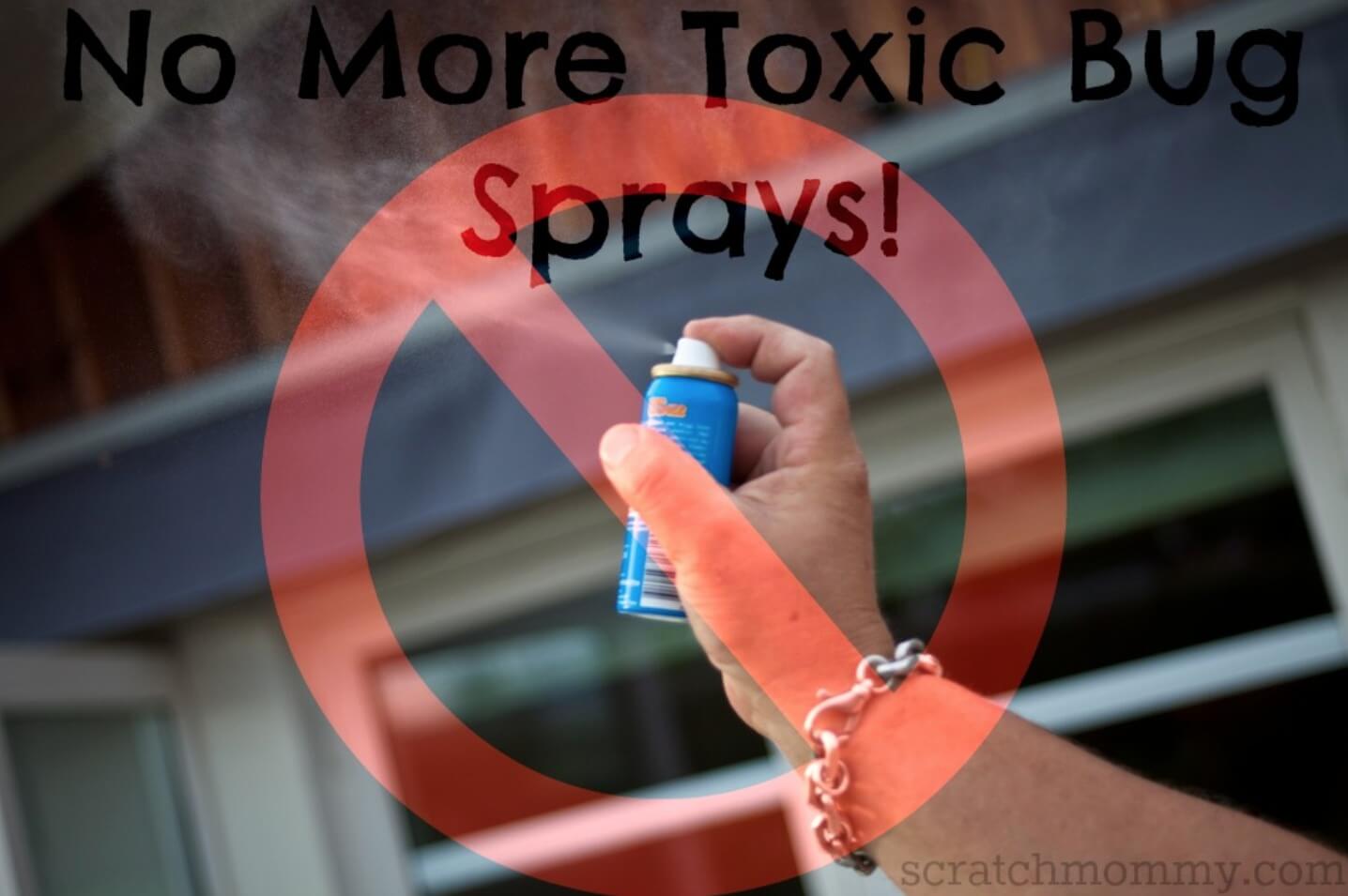 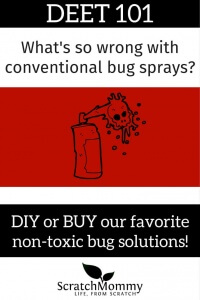 Nobody wants to be bugged by bugs, but sometimes the sprays we use to keep them at bay can be even worse than the bugs themselves. DEET has long been used in bug sprays, so many assume it’s safe.

But is DEET really safe, and what’s wrong with conventional bug sprays, anyway?

The era of WWII was a time that saw a huge increase in manufacturing items for the war, and bug repellant was no different. DEET was first developed for the military in 1946, and was first marketed for public use in 1955. The war also brought us other chemical warfare agents, like the deadly Napalm. We also got M&M’s out of the deal, so I guess it wasn’t all bad.

Some sources say that DEET works by covering the antenna of the mosquito with a substance they hate the smell of, and that it confuses their sense of direction. This makes it sound all rather harmless, if it’s really just a bad smell for the mosquitos. What they fail to mention to the consumer however, is that DEET has been shown to disrupt the central nervous system, or CNS. This study showed that it excited the CNS of flies, and works by inducing “neuroexcitation and toxicity in insects.”

Not only does DEET excite the brain cells and central nervous system of insects, but it works the same way in humans.

Some of the symptoms of DEET exposure on the human nervous system include:

Other symptoms caused by DEET can include: 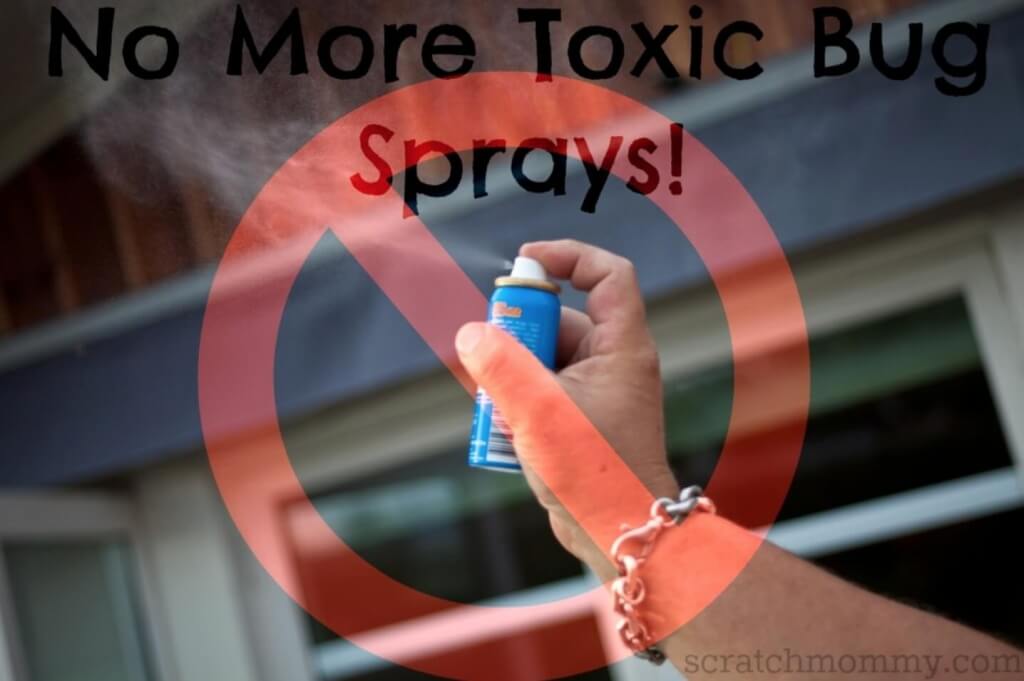 Why DEET is even worse for kids

DEET is especially dangerous for little ones. If their skin is sprayed with DEET and it isn’t washed off for a long period, it can cause seizures. Many parents spray their children all over with this poison, even exposing their faces, right next to their brains.

The safety data sheets provided by wholesale suppliers of the toxin urge any users to wear protective gloves, clothing, and eye and face protection…so a full hazmat suit would be appropriate. It warns to “wash contaminated clothing” and to not breath it in, in any form whatsoever. They also worn not to eat, drink, or smoke after handling it, as it may get in the mouth.

I remember those hot summer nights full of s’mores, catching fireflys…and of course bug spray. Of course we would eat around the campfire after using it. I don’t think we ever washed it off at night, and I know we’d wear the same clothes full of DEET the next day!

You may be thinking, “I was doused in DEET when I was younger and I turned out fine.” Maybe you didn’t have a seizure from it, but mood changes, trouble sleeping and other, more subtle forms of damage to the nervous system, can go largely unnoticed.

Destructive to the environment

Not only is DEET toxic to humans, but it’s destructive to wildlife as well. It’s classified as harmful to aquatic wildlife with long term damaging effects. DEET is also NOT biodegradable, so when it washes off your legs as you wade through the creek, or down the drain when you shower, it’s released into the eco-system and it stays there. DEET then makes its way to fish, ducks, frogs, and other water dwelling creatures, poisoning them as well. We’re all connected on this one planet we call home, and what poisons one of us, poisons all of us.

Most people don’t know that DEET is also an effective solvent. So damaging, that it can literally dissolve plastic, rayon, and spandex. It can strip the varnish from wood, and even dissolve plastic eyeglass frames and car seat vinyl! If DEET can be that harsh on synthetic materials, then you can imagine why it can cause burns, hives, and rashes on skin.

So many people still use DEET, largely because they’re unaware or uncaring of its harm. We want something that’s effective, so DEET is the go-to for bug protection. However, recent research is showing that DEET isn’t as effective as it’s touted to be.

Mosquito species that are the biggest carriers of malaria and other diseases have evolved, and DEET is no longer working on them. This study also found that mosquitos who were exposed to DEET a second time, weren’t as affected by it either.

And lastly, when DEET is applied to skin that’s also been coated in sunscreen, it penetrates the skin 6x more than skin without sunscreen. It also makes the sunscreen less effective. If the kids are out for a day at the lake, they’ll often need both sun and bug protection, but by combining the two, it makes it 6x more toxic AND ineffective!

Kicking DEET to the curb

Despite all of these facts, why is DEET still on the market? Many are under the misguided belief that DEET isn’t so bad. The same source that listed all those scary side effects ends the article with this statement. “When used as directed in small amounts, DEET is not very harmful.” So we’re admitting it’s harmful, but assuming it’s not worse than potentially getting a mosquito born illness.

Many scientists and other professionals still insist it’s really not that bad. This review of the evidence on the potentially toxic effects of DEET found it to be completely safe for children, even for babies to use. Never mind that the SC Johnson company, makers of OFF!® bug spray, were the ones who conducted the safety review. Can you say conflict of interest?

As scary as all of this is, you don’t have to sacrifice mosquito free evenings and sell your soul to DEET.

Certain plants and essential oils have been shown to be very effective against mosquitos and other bugs. If you’re the DIY type then whip up a batch of these bug repellant lotion bars or this DIY bug spray. And if you’re not the DIY type, or simply don’t have the time, then pick up some organic, good for you and for the environment (and effective!) Bug Be Gone Spray from the Pronounce Skincare Shop.