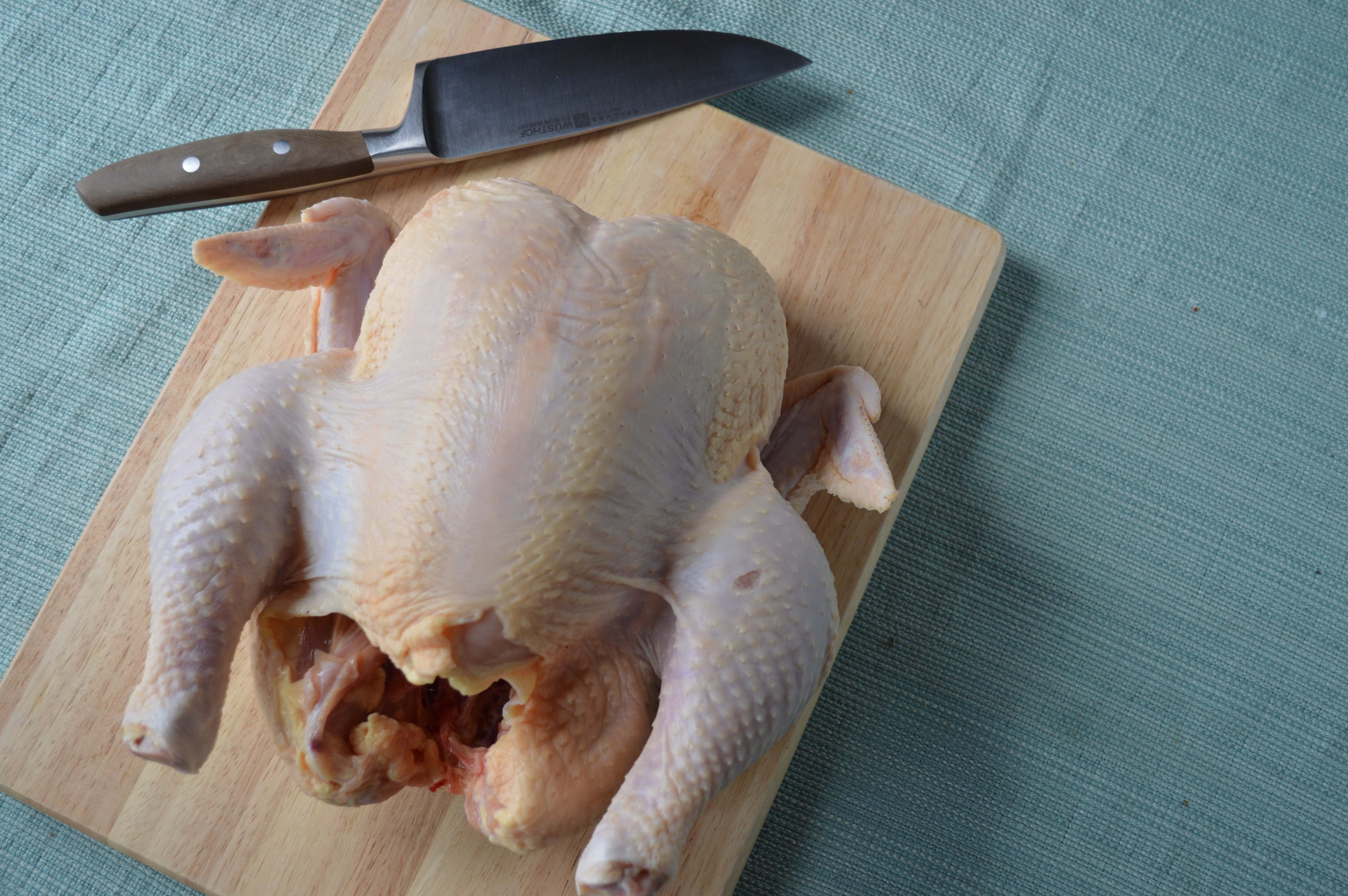 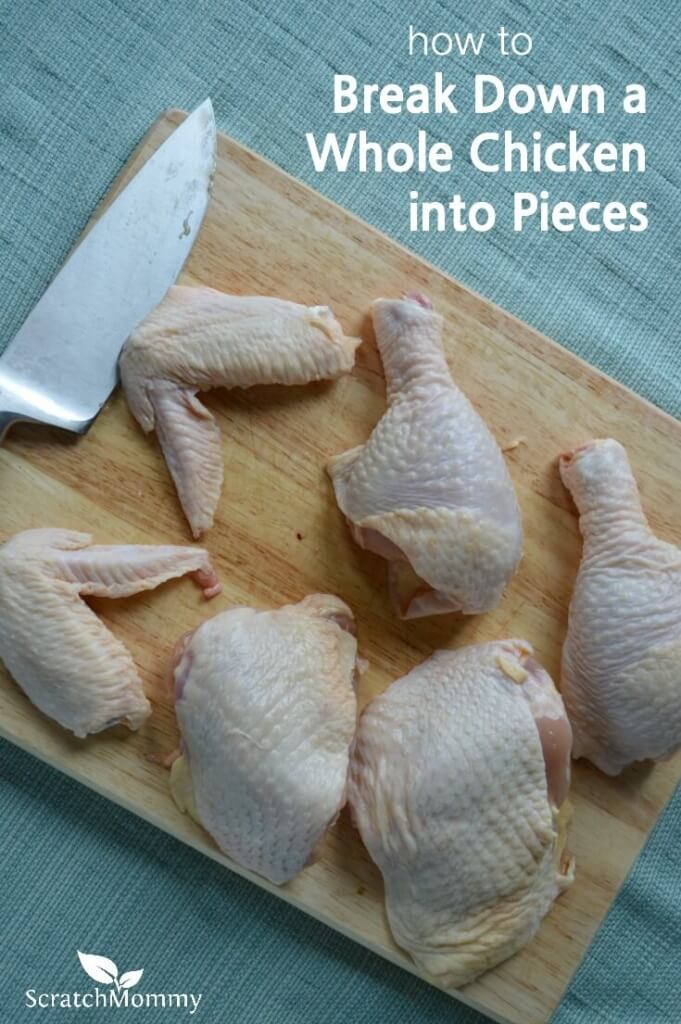 After interning at a food service operation in Southern California during the summer of 2008 and while living on my own in an apartment in Indianapolis, I made a decent effort to eat real food. In California I had learned a lot about food sourcing and the up and coming Farm-to-Table movement. So, in Indianapolis, I felt like I was doing the right thing by shopping at places like Trader Joe’s and Whole Foods. Occasionally, on the weekends in the summer, I would shop at farmers markets.

I loved to cook with my then boyfriend now husband, Adam, in my tiny apartment kitchen. We enjoyed trying new recipes and cooking with ingredients we never had prepared before, but I really liked it because it was kind of like playing house.

Flash forward to the end of 2012 and we weren’t playing anymore; We were married and wrapping up construction on our new home.

Our home sits on a large piece of land (at least it is large to this Chicago-by-birth gal…) and because my knowledge of food, food production, and desire for the freshest ingredients possible was growing each day, I knew I wanted to have a backyard garden. 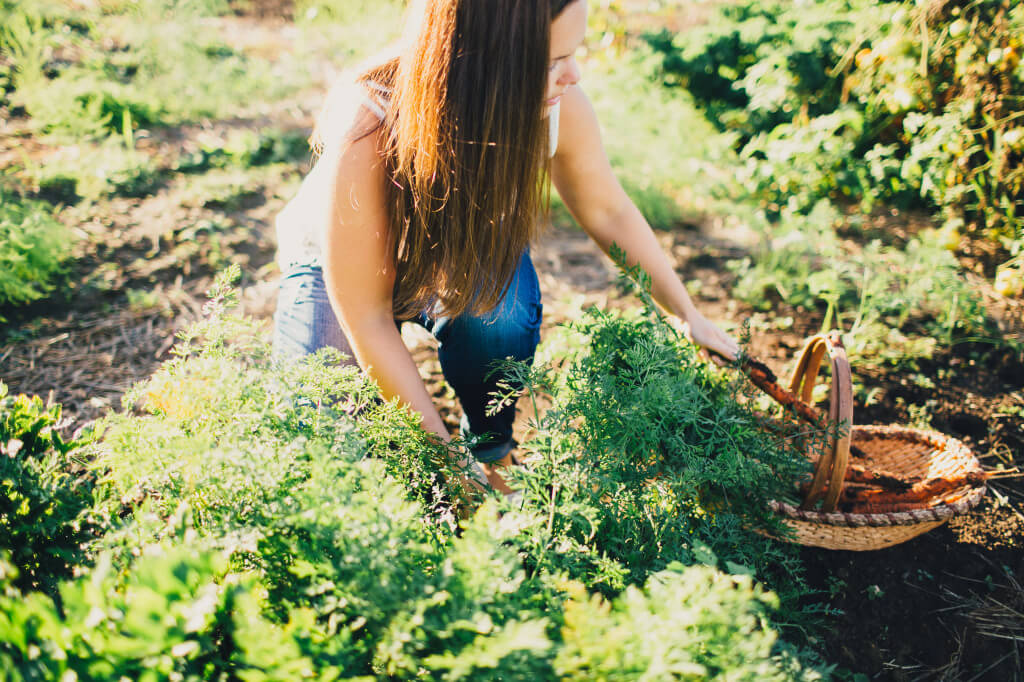 I wanted to know what asparagus really tastes like.

I wanted to eat big, juicy tomatoes still warm from the sun.

I wanted my own herbs to flavor my favorite meals.

So, I expressed my aspiration to Adam and he jumped on board eagerly making plans and trying to learn as much as he could about the best organic garden practices. After an evening of researching natural fertilizers, he told me we needed to get chickens as their composted droppings are perfect for backyard gardens.

I was skeptical and honestly a little nervous. I have never been a huge animal fan and we didn’t even own a dog (Still don’t…!). I wasn’t sure I was ready to take care of an animal.

But, ready or not, the same week we brought our first bunch of seedlings up from the depths of the basement for their first taste of real sunlight in the spring of 2013, we became the proud parents of twelve chicks and my life has never been the same. 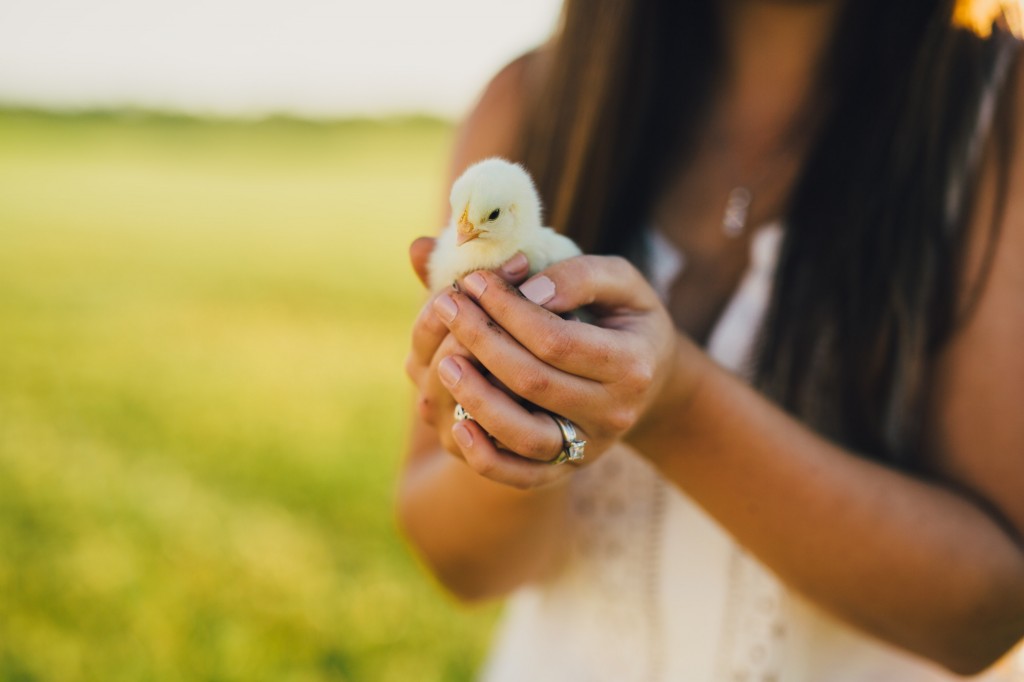 Since then, upwards of 75 chickens have called our backyard home at one time. We have layer hens and also raise free-range meat broilers twice a year.

Our garden reaps the benefits of our feathered friends. It produces so much food that feeds us well throughout the year, not to mention, in the summertime, it looks pretty dang good. Even our neighbor admired our tomato plants last summer, saying he had never seen tomato plants so tall and full.

But, it’s not just the garden that benefits from the chickens. So, do we. Fresh eggs are on another level of deliciousness in comparison to eggs you can purchase at a store. And, pastured chicken meat is so incredibly juicy. The flavor surpasses any chicken I have ever had and I can’t go back. 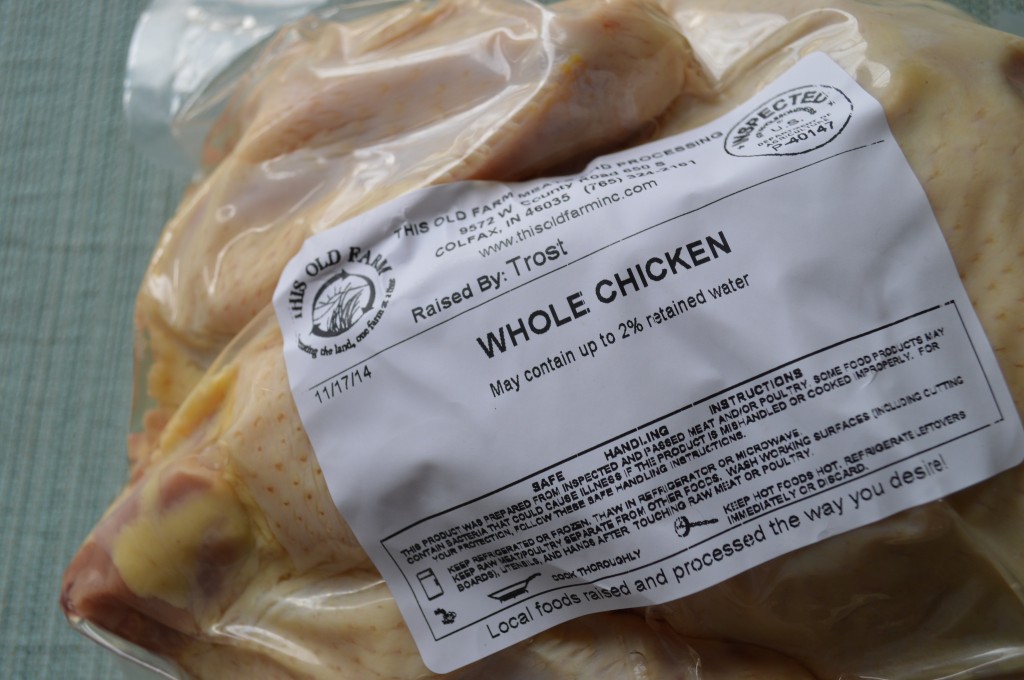 Okay, so maybe you can’t raise the birds in your yard. But, maybe you would like to start researching chicken farmers in your area or pick up a pastured chicken next time you are at the farmer’s market? Be aware that you may not be able to get just two boneless skinless chicken breasts or four pounds of thighs. A lot of the time, from farmers or growers at the farmers market, you will be purchasing a whole chicken.

A whole chicken is great for a lot of reasons; But, sometimes you just need a chicken breast.

I know it seems a little daunting to break down a whole chicken into pieces but it’s actually a lot easier than it sounds.

Not to mention, it’s so much more economical to break down one bird versus buying chicken pieces. All you need is a good knife, kitchen shears, a cutting board, and about ten minutes. 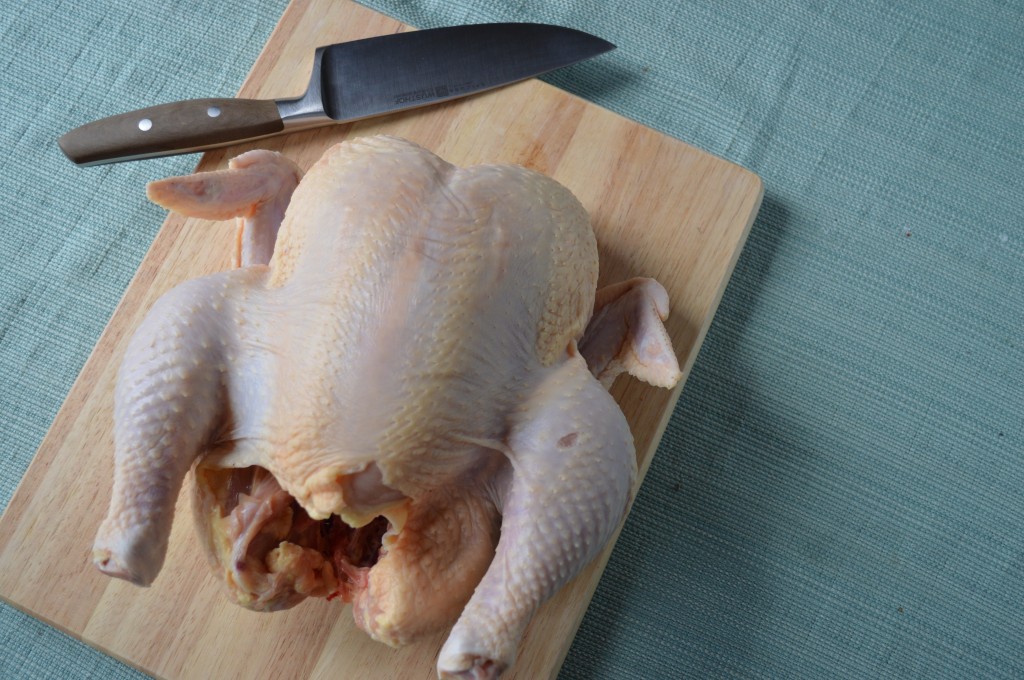 Step 1: Start with a completely defrosted chicken, rinsed and patted dry breast side up.

Step 2: Pull one of the wings away from the body and cut the skin and tendons. Twist at the joint to remove top part of the wing. Repeat with the other wing. 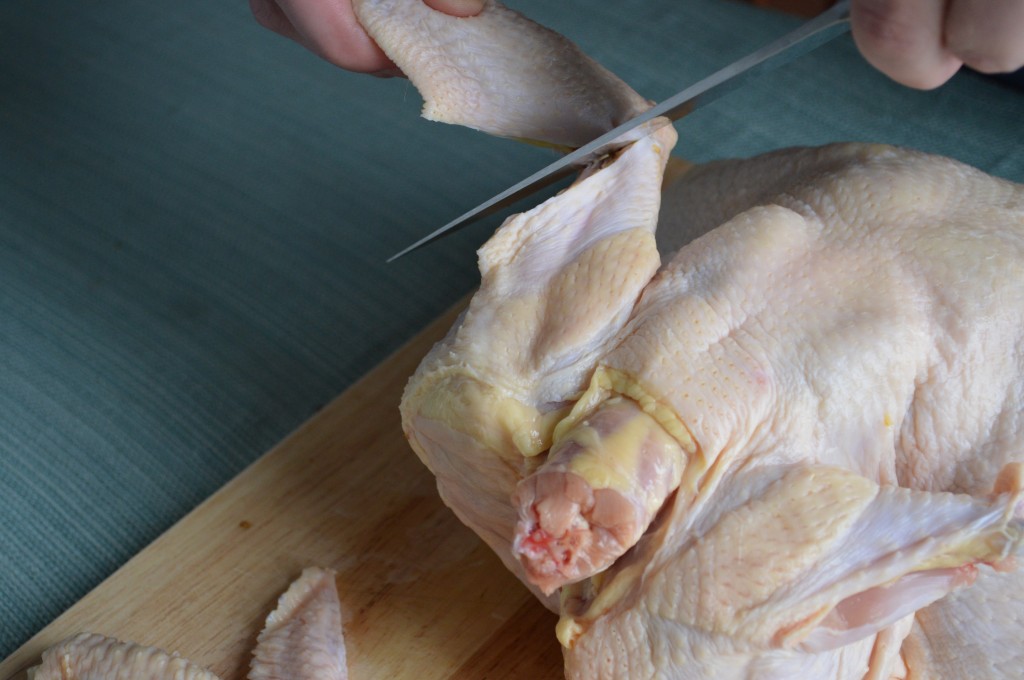 Step 3: Pull the thigh and leg away from the body as you cut the skin. Expose the joint where the thigh connects to the body and pop the joint. Run your knife through the joint once popped to separate completely. 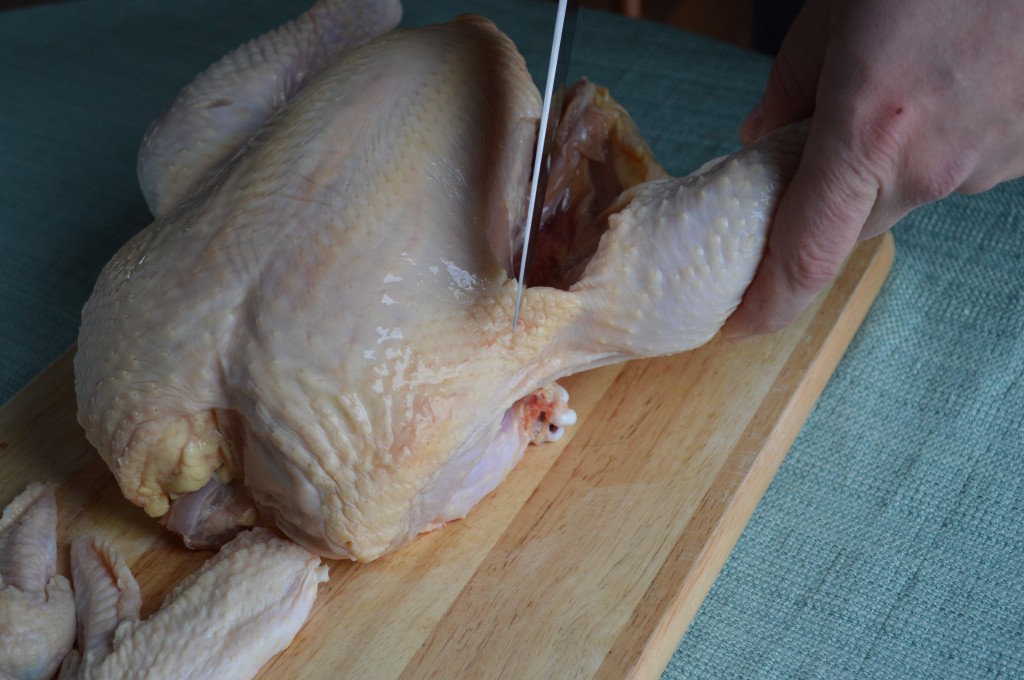 If you want to separate the leg and thigh, turn over so the skin is facing down and follow the fat line that runs between the two with your knife while bending at the joint.

Repeat on other side. 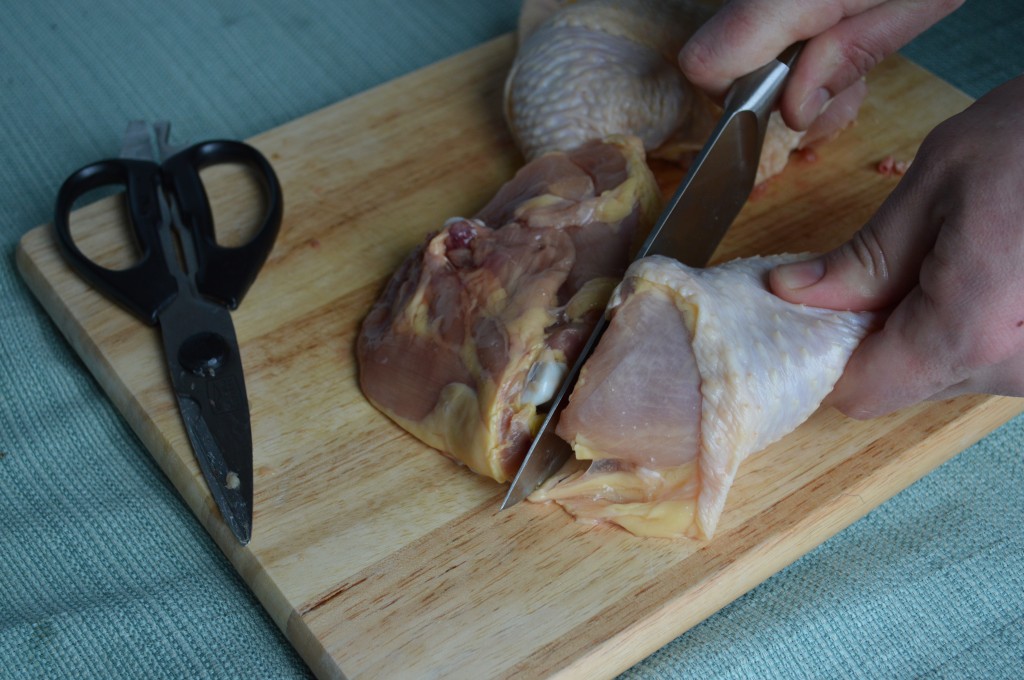 Step 4: I like to use kitchen shears to provide more dexterity, but a good knife works fine as well.

Starting at the base of the chicken, cut through the center of the breast to separate the breasts. 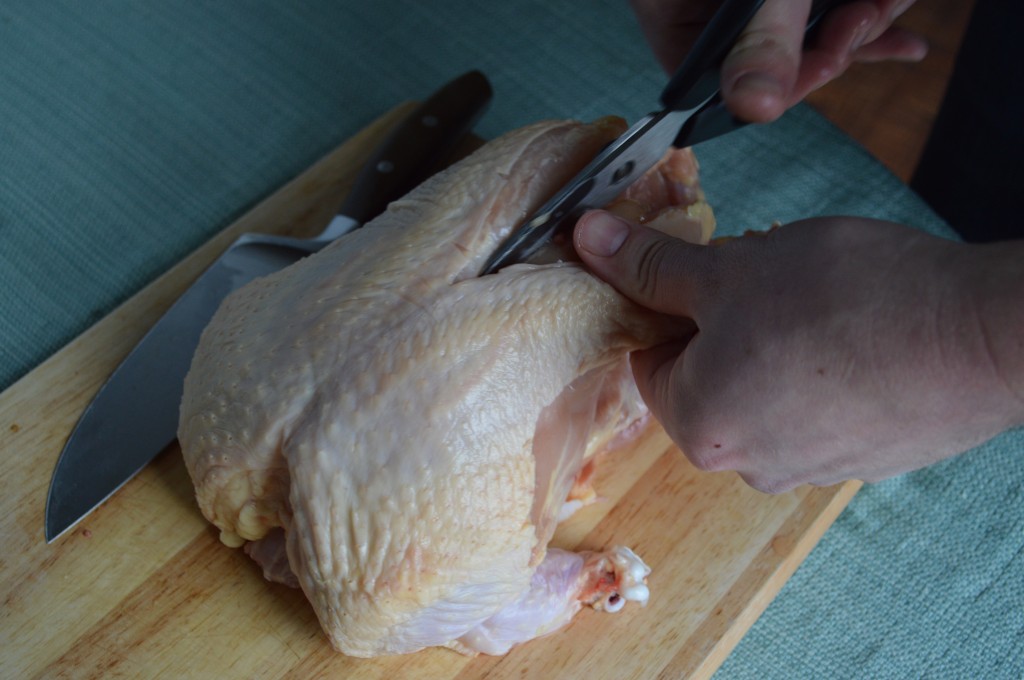 Step 5: Cut through both shoulders to separate each breast from the back.

Reserve the back for stock. 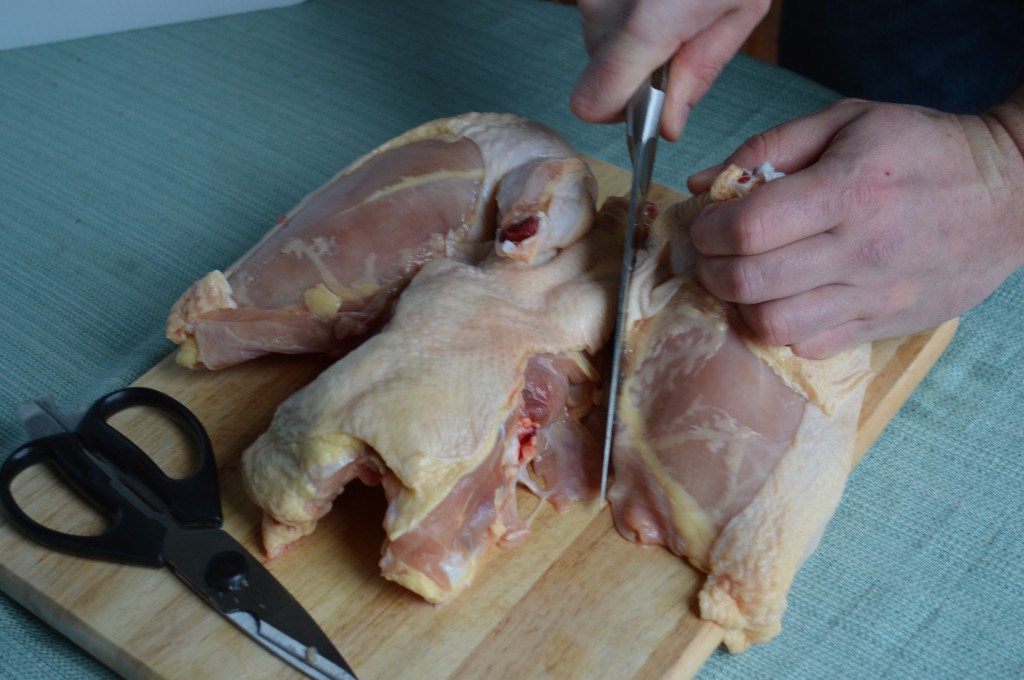 Now you have many chicken pieces from the same bird ready for #LifeFromScratch frying, baking, or both on separate occasions!

But, don’t forget to save the bones to make chicken stock! 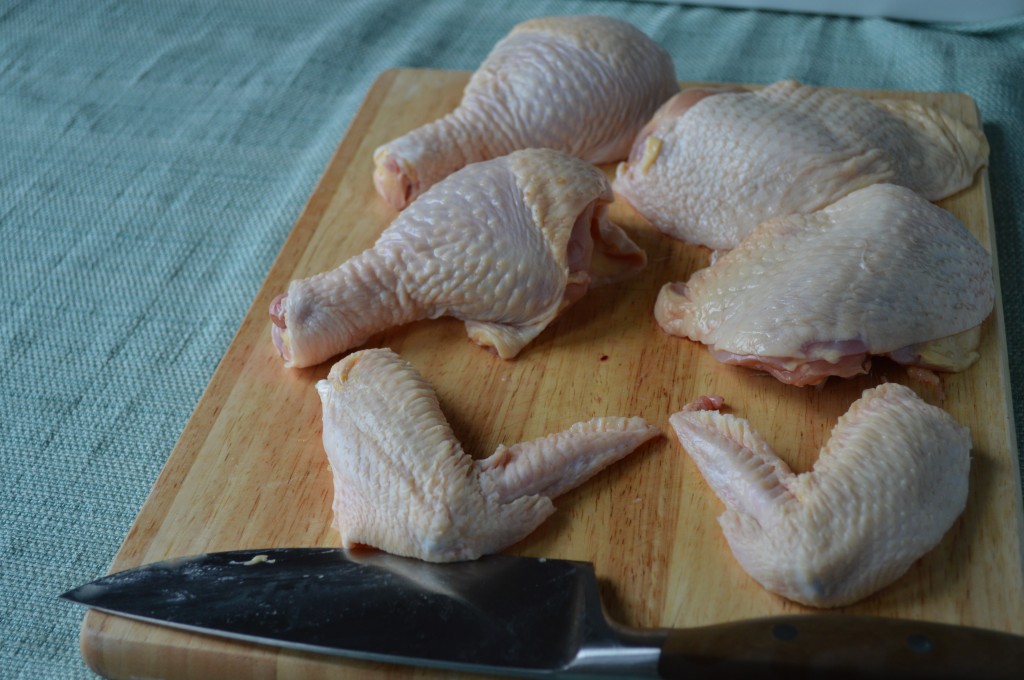