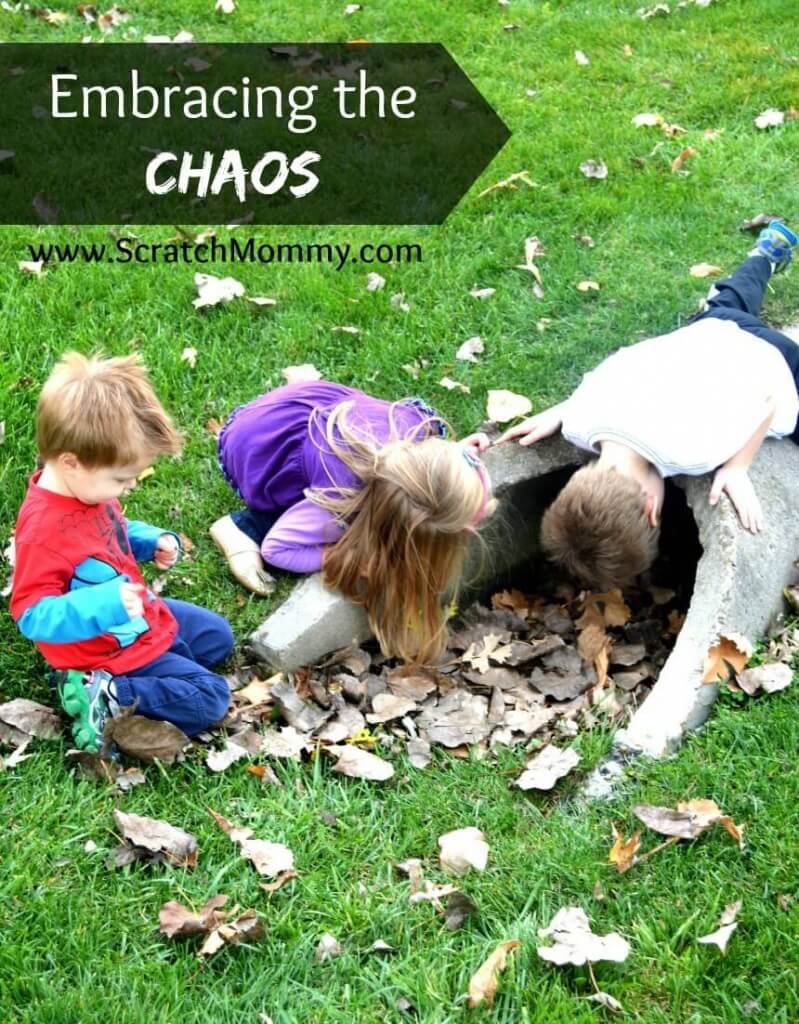 As we were heading in to the grocery store it was raining, and our five year old daughter was in a super cute pair of boots. It hadn’t rained in a while, and this was a good rain. The type of rain that makes a lot of puddles… the type of puddles perfect for five year olds to jump in. Without asking, she made her first leap in to one of the puddles which resulted in a series of cute giggles. She found another, and then another, and then another puddle to jump in. Despite my initial instinct to stop her, I’m proud to say I let her jump in those silly puddles even though she was wearing those super cute boots. Her boots dried and everything was fine. No damage done.

Sometimes we have to embrace the chaos and let our kids be kids.

I’m guilty… I often times parent based on the expectations others have for their kids, when in reality what’s important to me may not be important to another, and vise versa. It takes a conscience effort to stop and think – do I really care about this? I am a BIG believer in letting kids be kids when appropriate. Sometimes I stop my kids from doing something for no good reason simply because others would probably stop their kids from doing it. But I don’t want to be like everyone else.

I want to be the type of mom I want to be, which is one who embraces the chaos instead of deterring it.

Let’s be clear. I don’t let my kids run around department stores or terrorize other people’s houses. I certainly don’t believe in abusing the “let the kids be kids” thing. We have to teach our kids boundaries and appropriate behavior. We have to teach them to have good manners and how to show respect. They need to understand that there is a time and a place for everything. The fun I want my kids to have is the innocent fun that doesn’t hurt anyone; the type of fun that doesn’t prevent them from growing into functional and considerate human beings.

As an example, we had some super fun friends over for dinner. They brought their three kids who played with our three kids. Did I mention that five of the six kids were boys? Yikes! We all know nothing good can come from that…except maybe some seriously muddy fun. We had the slip-n-slide out earlier in the day, and the small wet area in our backyard turned in to one big mud pie. A couple of the kids made the discovery and jumped right in.

The other mom and I encouraged them to steer clear of the mud, but then both of us just said screw it and we decided to embrace the chaos!

I told her they could use the bathtub and we had plenty of spare clothes. They took their shoes off and we just let ‘em go…and off all six kids went. They played. They played hard. They laughed. They got the dirtiest I’d ever seen them. Wouldn’t you know it though? The kids got clean. The clothes got clean. After a while the bare patch in the lawn even grew back. No harm was done. The only regret I have is that I didn’t get any pictures. I mean seriously, someday the kids are going to outgrow this type of kid behavior, so why not let them enjoy it now.

Most of the things we obsess about as parents are really the unimportant things. Since we’re focusing so much on some unachievable form of perfection, it can take the fun out of childhood. It prevents us from embracing the chaos.

The chaos will soon be gone, and we won’t have the opportunity to let our kids go back and be kids again.

Kids are going to outgrow the desire to jump in puddles and roll around in the mud. One day they’re going to realize they don’t really enjoy the sensation of walking around in soggy shoes and muddy underwear. Why not embrace the chaos instead of robbing our kiddos of the infectious laughter that comes when we just let them go? I know this is what I’m working toward as a mommy because it is what’s important to me.